The United Methodist General Commission on Religion and Race elected Bishop Cynthia Moore-Koikoi of Western Pennsylvania as president of its 21-member board of directors at its July 11, 2020 board meeting.

She will replace Bishop W. Earl 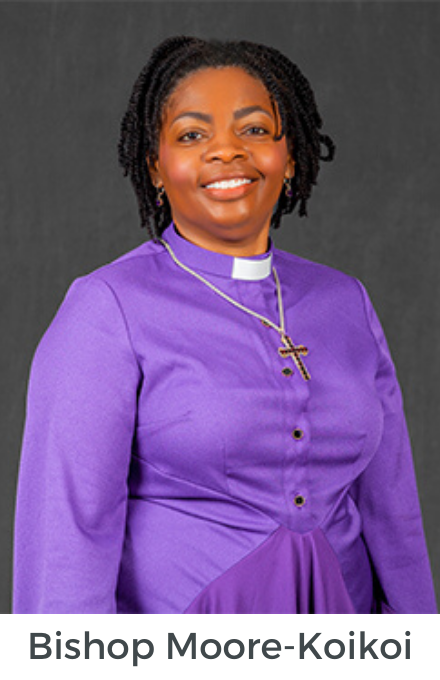 Bledsoe, episcopal leader of the denomination’s Northwest Texas-New Mexico Area. Bledsoe resigned as GCORR president last month. Her term of office will extend until the end of the quadrennium, in accordance with denominational guidelines.

Bishop Moore-Koikoi was elected a bishop in 2016 and has led the Western Pennsylvania Area since that time. Before her ordination as a United Methodist clergywoman, she was an active layperson in leadership in The United Methodist Church and her community. She earned degrees in psychology from Loyola College in Maryland and the University of Maryland, and worked as a school psychologist.
Bishop Moore-Koikoi

After answering the call to ministry, she attended Wesley Theological Seminary and was ordained in 2010 as a United Methodist elder. At the time of her election as bishop, she was serving as superintendent of the Baltimore (Md.) Metropolitan District.

As superintendent, she assumed a central pastoral and advocacy role during the height of civil unrest in the aftermath of the 2015 murder of Freddie Gray, a Black man killed by city police while in their custody. Bishop Moore-Koikoi led United Methodist congregations to open their sanctuaries to children and youth whose schools were closed and to address other community needs.

She says her new role at Religion and Race evokes in her a similar calling to lead United Methodist Christians in helping to address the spiritual and temporal needs of churches and communities seeking to bring about true racial justice and healing, especially during this time of heightened racial strife.

“George Floyd’s cries, ‘I can’t breathe,’ have brought us to an inflection point in the centuries-long quest for justice for people of African descent living in the United States and all around the world,” Bishop Moore-Koikoi explains.

“Mr. Floyd’s cries have ignited a movement. Therefore, I commit to lead the board to help ensure systemic and relational equality within United Methodism for all of the races represented in our beloved denomination; to help raise consciousness regarding the intersectionality of all systems of oppression, racism, tribalism, and religion; and resource the denomination to dismantle racism and press on to freedom as we simultaneously create a more nimble board culture in order to address the rapidly evolving realities of our global culture,” she adds.

The General Commission on Religion and Race, based in Washington, is one of 13 church-wide agencies mandated to provide training, resources, anti-racism education, and support for regional judicatories and congregations of the United Methodist Church world. The chief executive officer is Erin M. Hawkins.